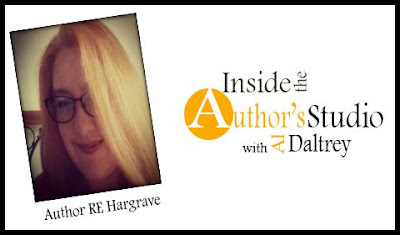 Al: Most people probably know you from 'The Divine Trilogy'. But you also have stand-alones. How does it work for you? What determines when you begin a new series, versus writing a stand-alone novel?


RE: Most people know, but not everyone does, that I cut my writing teeth on fanfiction. Yes, I'm one of those dreaded (?) pull to publish authors of Twilight fanfic. My Divine Trilogy started in the fandom in October 2010, when I put up the first chapter of To Serve is Divine, but didn't find its ending until I published Surreal in December of 2014.
When I began the overhaul of the fic and outtakes, I had about 130k of source material and one story ... written in first person and set in Washington State. I knew to tell the story I wanted was going to take more than one book and had to choose where the most reasonable "breaks" were, thus establishing how many books would be needed. By the end, I had close to 256k words across three novels: book one covers a year, book two covers a weekend, and book three covers about three years. The first two take place in Texas, while the final book is mostly in Texas but also includes some international traveling. The Trilogy is in third person and my main characters look, act, and sound nothing like their "original" counterparts. In other words, the trilogy may have started with someone else's characters, but it ended as 100% mine and I couldn't be more proud of it.
As for my stand-alones, so far, these are all short stories and novellas. That's not to say I don't have a few full length stories partially plotted and waiting on me in assorted word docs (mermaids, shifters, naughty professors). Whether they will become series is yet to be seen; I have to finish writing them first. I do know that I will not start publishing another series without having the whole thing written first again. I felt awful having to make readers wait a little over a year for me to get Surreal out to them.
Short answer to your question . . . how much story the characters want me to share determines if it'll be a one-off, or a whole new world.
Al: If you could bring any of your work to life in a new format, what do you think that might be? For example - would you rather see something you've written come to life in the theatre, on film, or in an illustrated book format?  And why?

RE: The next medium beyond basic print? Well, Haunted Raine could be fun to see brought to life on film. An older couple dealing with empty-nest syndrome buy a haunted beach house--it could make a good summer Lifetime movie, right?

I suppose The Food Critic and Fire Lust could also be put on film, with the right actors. *coughs* Anyone have a contact number for James Deen or Casey Calvert? In all seriousness, though, the next logical step for me will probably be getting the Trilogy into audio book format. The trick is finding time to find a narrator who can do a Texan male and an Irish female voice, and who isn't uncomfortable with explicit sexual content. Someday.Al: Seeing as your work has 'explicit sexual content' - how do you manage extended family, neighbors, co-workers, etc.  Do you keep your Author world separated?  Any advice for other Authors in that regard?
RE: When I was writing fanfiction, my Husband knew, and our kids knew to a point. Family didn't find out I was writing until I began publishing. Not all of my stuff is erotic, though; my daughter has read two of my novellas. Where the sexy stuff is concerned, the kids have been told they aren't allowed to read it while they're still living at home, and my parents have been told that if they read it, then I don't want to know! LOL


I'm not ashamed of what I write, so no, I don't keep my author world too separate (other than the fact that by 4pm I am shutting down to be mom and wife for the evening).


Sex is natural. So is love, and real life . . . that's what you'll find in my stories, even the fantasy or paranormal ones.

I believe in research for realism's sake. And when you're proud of what you've done, you shouldn't hide it. Just be responsible in how you present the material to the masses, because you never know when you might offend. My website has an 18+ warning on it, as do my blurbs. I won't do teasers with practically naked people, filled with foul language, or sampling the more graphic excerpts from my books. There are enough warnings and subtle indications of what happens INSIDE the books in my marketing that the nitty-gritty doesn't need to be out on display for all to see. The reader has a choice to open the book and enter my kinky world of their own accord.
Al: If you had to move to another country, in retirement, where would you choose and why?RE:  Do I HAVE to leave the country? My Husband and I have discussed this . . . ideally, and in particular if money is no object, we want to load up in an RV and go road-tripping. When we hit a coastline, we then want to get on our boat (Nauti Paddles) and keep going. Thanks to Facebook, I've made friends all over the world so what better time or way to head out to meet them all? The big bonus would be getting to write while He drives, and working in various signings or author events along the way so that I can meet readers as well.

Your email will NEVER be shared with any other Author
for any reason.