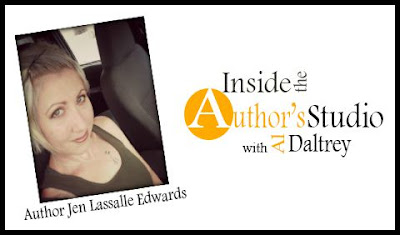 Al: The first time I was exposed to your work, I made a comment that you 'paint pictures with your words'. Tell us about that. Is it an intentional form of writing. Do you see yourself as a visual writer?

Jen: Geez, you have a memory like an elephant! This is a great question because I have never really thought about it before, so I pondered this, and I came up with this answer and the origin of how I developed the skill (I guess you'd call it a skill.)

I think have intentionally formed heavy description into the way I write. I say this because I remember one of my writing/literature classes in college. We were assigned to write a descriptive story. I recall our professor telling us that this meant we could not use general descriptions such as beautiful or ugly because these adjectives can mean so many different things to everyone, since beauty or unattractiveness is subjective. This professor, instead, told us to describe details, colors, texture, actual sensory factors to be able to allow the reader to see what we saw as we wrote. It was a process to stop and try to convey what I saw in my mind's eye to the reader without being general.
The best part was later the professor passed out our stories around the class. We had to read silently, and no one knew who was reading their own paper. The class was quiet, and all of a sudden, one person gasped and said, "Oh my God! No!" As it turned out, it was my paper.
I think that formed my skill and cemented the way that I wanted to write, and hopefully, elicit a response from a reader. So, that was the long answer to the question. Yes, I intentionally try to write so that a person may enter the movie reels in my head. *crosses fingers that it's working*

Al: I think it is working. I can tell you I was envious when I first read your work. It helped me up my game. Speaking of movie reels...would you ever dabble with a screenplay? Does that have any interest?

Jen: Thank you. You know, I have never really thought of it. I would have absolutely no clue where to start, or how screenplays are set up and written, especially in relation to stage direction. Do they write direction and character development along the way? Hmm, now I'm a little intrigued. I can't say that I wouldn't want to have a hand in something like that.

Al: No, in screenplays stage direction is a big no-no. The Director figures that out later. Next question: so what is your game plan going forward. Do you think a decade from now you will have ten stand-alones?  Or, are you simply taking it one book at a time?

Jen: I would love to say that I could do a series, but my mind does not work that way. I've had requests for spin-off books with some of my ancillary characters. Even if I did decide to tell their stories, I believe I would make them stand-alones as well. Guess, I'll take it one book at a time and see where that leads me.

Al: Last question: What is your biggest fear?

Jen: When I am old, chance are I will die alone, and since by that time, I will have no other family, no one knowing and having my animals eat my dead body in the house... Which is also why I married a younger man, hopefully, he won't croak before me. Too depressing? Sharks. Those are some evil bastards.

Your email will NEVER be shared with any other Author
for any reason.